Croatia is a country at the crossroads of the Mediterranean, Central Europe, and the Balkans. Its capital is Zagreb. Croatia borders with Slovenia and Hungary to the north, Serbia to the northeast, Bosnia and Herzegovina to the east, Montenegro to the far southeast, and the Adriatic Sea to the south. Croatia is a candidate for membership of the European Union and is expecting NATO membership invitation in April 2008. On October 17, 2007 Croatia became a non-permanent member of the United Nations Security Council. 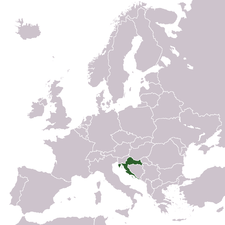 Croatia is located in Southern Europe. Its shape resembles that of a crescent or a horseshoe, which flanks its neighbours Serbia, Bosnia and Herzegovina and Montenegro. To the north lie Slovenia and Hungary; Italy lies across the Adriatic Sea. Its mainland territory is split in two non-contiguous parts by the short coastline of Bosnia and Herzegovina around Neum.

Its terrain is diverse, including plains, lakes and rolling hills in the continental north and northeast (Central Croatia and Slavonia, part of the Pannonian Basin). Densely wooded mountains in Lika and Gorski Kotar, part of the Dinaric Alps. Rocky coastlines on the Adriatic Sea (Istria, Northern Seacoast and Dalmatia).

The country is famous for its many national parks. Croatia has a mixture of climates. In the north and east it is continental, Mediterranean along the coast and a semi-highland and highland climate in the south-central region. Offshore Croatia consists of over one thousand islands varying in size.