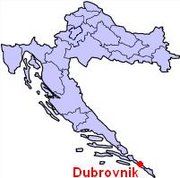 Dubrovnik is an historic city on the Adriatic Sea coast in the extreme south of Croatia, positioned at the terminal end of the Isthmus of Dubrovnik. It is one of the most prominent tourist destinations on the Adriatic, a seaport and the centre of Dubrovnik-Neretva county. Its population was 43,770 in 2001 down from 49,728 in 1991. In 2001 the absolute majority of its citizens declared themselves as Croats with 88.39% (2001 census). Since 1979, the historic centre of Dubrovnik has been included in the UNESCO list of World Heritage Sites. The prosperity of the city of Dubrovnik has always been based on maritime trade. In the Middle Ages, as the Republic of Ragusa, it became the only eastern Adriatic city-state to rival Venice. Supported by its wealth and skilled diplomacy, the city achieved a remarkable level of development, particularly during the 15th and 16th centuries. Ragusa was one of the centres of the development of the Croatian language and literature, home to many notable poets, playwrights, painters, mathematicians, physicists and other scholars.

Ragusa was founded in the 7th century on a rocky island named Laus, which provided shelter for Latin refugees from the nearby city of Epidaurus, today's Cavtat also Ragusavecchia. Some time later a settlement of Slavic people grew at the foot of the forested Srđ hill. This settlement give to the city its slavic name "Dubrovnik".

The strip of wetland between Ragusa and Dubrava was reclaimed in the 12th century, unifying the city around the newly-made plaza (today Placa or Stradun). The plaza was paved in 1468 and reconstructed after the earthquake of 1667. The city was fortified and two harbours were built on each side of the isthmus.

From its establishment in the 7th century, the town was under the protection of the Byzantine Empire. After the Crusades, Ragusa/Dubrovnik came under the sovereignty of Venice (1205–1358), and by the Peace Treaty of Zara in 1358, it became part of the Kingdom of Hungary.

Between the 14th century and 1808 Ragusa ruled itself as a free state. The Republic had its peak in the 15th and 16th centuries, when its thalassocracy rivalled that of the Republic of Venice and other Italian maritime republics.

The Republic of Ragusa received its own Statutes as early as 1272, statutes which, among other things, codified Roman practice and local customs. The Statutes included prescriptions for town planning and the regulation of quarantine (for hygienic reasons). The Republic was very inventive regarding laws and institutions that were developed very early:

Medical service was introduced in 1301 The first pharmacy (still working) was opened in 1317 A refuge for old people was opened in 1347 The first quarantine hospital (Lazarete) was opened in 1377 Slave trading was abolished in 1418 The orphanage was opened in 1432 The water supply system (20 kilometers) was constructed in 1436 The city was ruled by aristocracy that formed two city councils. As usual for the time, they maintained a strict system of social classes. The republic abolished the slave trade early in the 15th century and valued liberty highly. The city successfully balanced its sovereignty between the interests of Venice and the Ottoman Empire for centuries.

The economic wealth of the Republic was partially the result of the land it developed, but especially of the seafaring trade it did. With the help of skilled diplomacy, Ragusa's merchants traveled lands freely, and on the sea the city had a huge fleet of merchant ships (argosy) that traveled all over the world. From these travels they founded some settlements, from India to America, and brought parts of their culture and vegetation home with them. One of the keys to success was not conquering but trading and sailing under a white flag with the word freedom (Latin: "Libertas") prominently featured on it. That flag was adopted when slave trading was abolished in 1418.

Many Conversos (Marranos) — Jews from Spain and Portugal — were attracted to the city. In May, 1544, a ship landed there filled exclusively with Portuguese refugees, as Balthasar de Faria reported to King John. During this time there worked in the city one of the most famous cannon and bell founders of his time: Ivan Rabljanin (Magister Johannes Baptista Arbensis de la Tolle).

The Republic gradually declined after a crisis of Mediterranean shipping — and especially a catastrophic earthquake in 1667 that killed over 5000 citizens, including the Rector, leveling most of the public buildings — ruined the well-being of the Republic. In 1699 the Republic sold two patches of its territory to the Ottomans in order to avoid terrestrial borderline, with advancing Venetian forces.

In 1806 the city surrendered to French forces, as that was the only way to cut a month's long siege by the Russian-Montenegrin fleets (during which 3000 cannon balls fell on the city). At first Napoleon demanded only free passage for his troops, promising not to occupy the territory and stressing that the French were friends of the Ragusans. Later, however, French forces blockaded the harbours, forcing the government to give in and let French troops enter the city. On this day, all flags and coats of arms above the city walls were painted black as a sign of grief. In 1808, Marshal Marmont abolished the republic and integrated its territory into the Illyrian provinces.