Istria country is the westernmost county of Croatia which includes the biggest part of the Istrian peninsula (2820 out of 3160 km2). Area is called Istra in Croatian and Slovenian, and Istria in Italian. Because of important ethnical minorities, especially Italians, the region adopts a bilingual form. Its administrative center is Pazin/Pisino. 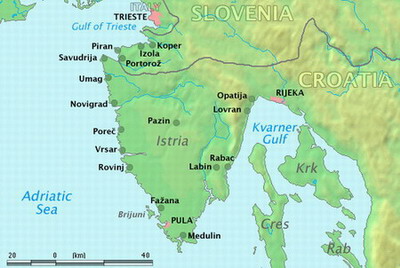 Its coastline is 445 km long with islands making up 539.9 km. A smaller part of Istria also belongs to the Primorje-Gorski Kotar county of Croatia. Mirroring the bay of Venice across the Adriatic and the Gulf of Kvarner, the region is not far from the Julian Alps. The western most point is at Savudrija while the southern most is near Premantura, (Promontorio in Latin), on the local promontory Kamenjak.

The terrain consists of a limestone plateau, much of which lacks water owing to its karst topography. The northeastern section is an extension of the Dinaric Alps. The highest point is Vojak on Učka mountain 1,401 m above sea level while another range of mountains is Ćićarija.

There are so called "bijela", "siva", "crvena" Istra, (white, grey and red Istria). White Istria is around the mountain peaks, Grey Istria is the fertile inner lands while Red Istria is blood-red painted lands of terra rossa or "crljenica" near the coastline.

Sites such as the Grotto of Beredine near Poreč, the underground river Pazincica (Pazinčica) and the karst Pazin pit (Pazinska jama, Foiba di Pisino) near Pazin are popular geologic attractions. The Limski Kanal is the only fjord resembling structure in Europe outside of Scandinavia (actually it's not a fjord, but a ria). The quarry near Rovinj is specifically designed for studying geology. The longest river, Mirna (Croatian for "she, the tranquil one") is only 32 km long with its mouth near Novigrad/Cittanova. Other rivers that pass through Istria include the Dragonja River and Raša River.

The continental plains and valleys, are primarily utilized for agricultural produce such as cereals and vegetables. Closer to the sea, red lands are used for cultivation of grapes, vine, olives and figs. Agriculture and the production of ecological food, the olive gardens, and the production of quality wines, is the focus of Istria's agriculture sector. The coastline and nearby islands are rich in Mediterranean vegetation with pine woods - the green macchi, (mostly holm oak and strawberry tree). Woods, mostly oak and pine trees, cover a third of the territory.

The well-known natural reservations national park Brijuni and nature park Učka are legally protected landscapes. Other interesting localities are Lim Kanal, wood near Motovun, park woods Zlatni Rt and Šijana near Pula, protected landscape Kamenjak in the extreme south of Istria, the reservation Palud, (ornithology), near Rovinj. Brijuni archipelago is interesting as the habitat of about 680 plant species, also decorated by the most diverse vegetation and olive groves.

Protected from the north by the mountain chain of Alps as well the inner highland, the climate is Mediterranean, very pleasant, with the highest air temperature averaging 24°C during August and lowest averaging 5°C, in January. Summers are usually warm during the day and cooler near the evening, although strange heat wave patterns are common. The weather also ranges from humid to dry with over 10 hours of sunshine daily. Primarily, there is a lot of moisture in the air, especially in the costal towns of Istra such as Porec, Vrsar, Rovinj, Pula and others. Temperatures above 10°C last for more than 240 days a year. Excessive heats, (above 30°C), last for three weeks at most. Despite air temperatures being lower than those of in Dalmatia, the Adriatic sea is warmer, reaching up to 26°C in August, coldest in March, (9-11°C), while the freezing even in small, shallow bays is very rare. Two kinds of winds are here - the "bura" or "bora" is bringing cold and clear weather from the north in winters, and the southern "Jugo", (jug=south) bringing rain in summer. "'Maestral"' is the summer breeze blowing from the inland to the sea. The salinity of the sea water is 0.37 %.

The caves near Pula, Lim fjord Sandalja and Roumald's cave, house stone age archaeological remains. Less ancient stone age sites, from the period between 6000-2000 BC, can also be found in the area. More than 400 locations are classified as Bronze Age, (1800 - 1000 BC), items. Numerous findings including weapons, tools, and jewelry), which are from the earlier iron era around the birth of Christ.

The Istria peninsula was known to Romans as the terra magica. Its name is derived from the Illyrian tribe called Histri, who, according to geographer Strabo, lived in the region. Romans described them as pirates who were hard to conquer due to difficulties they experienced when navigating along their territory. After two military campaigns, Roman legions finally subdued them in 177 BC.

With the fall of the Western Roman Empire in 476, Istria was conquered by the Longobards and the Goths. With the end of the 6th century, Croats arrived and built their first permanent settlement around the year 620. Istria was annexed by the Franks during the reign of (Pippin III) in 789, then successively controlled by various dukes, (Carinthia, Merano, Bavaria), and the patriarchs of Aquileia.

In 1267 the Republic of Venice annected the Istrian peninsula because of the strong presence of the autochthonous Italian community; it is in this period that the region lived a prosper period. The major Istrian cities re-born under Italian government, and it was in this half millennium that they developed their typical beauty and atmosphere. In 1797, with the Treaty of Campo Formio written by Napoleon, the peninsula, with the whole Republic of Venice, passed to the Habsburgs Austria. Starting in 1861, the capital of Istria and the seat to a Regional Parliament in Austro-Hungarian Empire was in Poreč (Parenzo).

After the World War I, according to the peace treaty of Rapallo, in 1920 Istria became part of Italy. Later Nazi occupation spoiled otherwise tolerant ethnic relations. After the World War II, Istria was assigned to Yugoslavia and many were forced to leave the place of their ancestors and sprlawled around the world. Some well known exiles from Istria include race driver Mario Andretti, singer Sergio Endrigo, chef and restaurateur Lidia Bastianich, and boxer Nino Benvenuti.

Famous individuals like Robert Koch and writer James Joyce lived and worked in Istria. Writer Jules Verne was inspired to write his novel "Mathias Sandorf" after hearing of (quarry and cave) in Pazin and the poet Dante Alighieri visited and wrote a few lines about Istria.