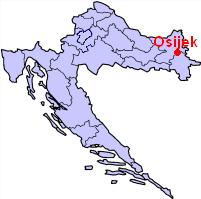 Osijek is the fourth largest city in Croatia with a population of 114,616 in 2001. It is the largest city and the economic and cultural centre of the eastern Croatian region of Slavonia, as well as the administrative center of Osijek-Baranja county.

Osijek is located on the right bank of the river Drava, 25km upstream of its confluence with the Danube, at an elevation of 94m. Transport links include major railway and highway junctions, a river port, and a regional airport. A full motorway, linking the important city to the rest of the Croatian motorway network and the major Pan-European corridor 5c, is well under construction and will reach Osijek by 2008.

The beginnings of man's residence in Osijek goes back to Neolithic times, and the first known inhabitants belong to the Illyrian tribes. Roman emperor Hadrian raised the old settlement of Mursa to a colony with special privileges in 131. After that, Mursa had a turbulent history, with several decisive battles that took place here (among which the Battle of Mursa Major in 351 and the battle between Aureolus and Ingenuus in 260), deciding the destiny of the whole region. After their migration, the Croats made a settlement near the ruins of Mursa, giving it its present name, Osijek. Life was thriving here in the Middle Ages, but only traces of that life can be found today because the Turks destroyed everything they found and made a town to suit their style.

The earliest mentions of Osijek date to 1196. The town was a feudal property of the Korogyi family between 1353 and 1472. The city was sacked and destroyed by the Ottoman Empire on August 8, 1526. The Turks rebuilt it in oriental style and it was mentioned in the Turkish census of 1579. Suleiman I built here his famous, 8 kilometers long wooden bridge, considered to be one of the wonders of the world. The town was officially promoted to a city by the end of the 17th century.

Osijek was restored to western rule when on September 29, 1687 it was occupied by the Habsburg Empire. Between 1712 and 1721, new Austrian authorities built a new fortress (authored by the architect Maximilian de Gosseau), known as Tvrđa. It is a unique urban and military complex that lies in the heart of the town. Its main central Holy Trinity Square is closed on the north by the building of the Military Command, on the west there is the Main Guard building and on the east is the Magistrate building (presently Museum of Slavonia). In the middle there is a monument to the plague, erected in 1729 by general Petras' widow. The Gornji Grad (Upper Town) was founded in 1692 and Donji Grad (Lower Town) followed on 1698. Tvrđa, Gornji and Donji grad continued as separate municipalities until 1786. In late 18th century it took over from Virovitica as the center of the Verőce county.

Secession Façade of OsijekIn 1809 Osijek was granted the title of a Free Royal City and during the early 19th century it was the largest city in Croatia. The city developed along the lines of other central European cities, with cultural, architectural and socio-economic influences filtering down from Vienna and Budapest.

During the 19th century, cultural life mostly revolved around the theatre, museums (the first museum was opened in 1877 by private donations), collections and printing houses (the Franciscans). City society, whose development was accompanied by a prosperous economy and developed trade relations, was related to religious festivals, public events (fairs), entertainment and sports.

The Novi Grad (New Town) section of the city was built in the 19th century, as well as Retfala to the west. The newest additions to the city include Sjenjak, Vijenac, Jug and Jug II, which were built in the 20th century. The city's geographical riverside location, and noted cultural and historical heritage — particularly the baroque Tvrđa, one of the most attractive structures in the region — facilitated the development of tourism.

During the war in Croatia from 1991 to 1995 the city avoided heavy destruction (as in occurred in nearby Vukovar, for example) and sustained moderate damage, especially to the center and main church of St. Peter and Paul and to the periphery. More than a thousand (over 1200) civilians also died in the daily bombarding of the town during the aggression. While some buildings still have mild damage, most often the occasional superficial pockmark from shelling, the city's facades are generally in good shape, due to extensive restoration in recent times, preserving the charm of its intricate Austro-Hungarian Baroque architecture in the older quarters of town. A small tram network runs through the city, effectively transporting the town's inhabitants. The network is currently being completely overhauled and more than doubled in length, and the city's old trams are being modernized.