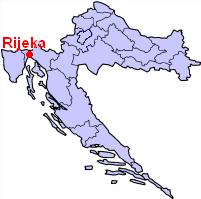 Rijeka is the center of Primorje-Gorski Kotar County in Croatia. The city's economy largely depends on sea transport, shipbuilding (shipyards "3. Maj" and "Viktor Lenac") and tourism.

Rijeka hosts the Croatian National Theatre "Ivan pl. Zajc", first built in 1765, as well as the University of Rijeka, founded in 1632. The local football clubs are NK Rijeka and NK Orijent.

Though traces of Neolithic settlements can be found in the region, the earliest settlements on the site were Celtic Tarsatica (modern Trsat, now part of Rijeka) on a hill and the tribe of mariners, the Liburni in the natural harbor below. The city long retained this double character.

In the time of Augustus, the Romans rebuilt Tarsatica as a municipium (MacMullen 2000) on the right bank of the small river Rječina (whose name simply means "river") as Flumen. Pliny mentioned Tarsatica (Natural History iii.140). After the 4th century the city was rededicated as Flumen Sancti Viti, the city's patron saint. From the 5th century onwards, the town came under successive Frankish, Croatian and Magyar rule before coming under the control of the Austrian Habsburgs in 1466.

Created a free port in 1723, Fiume was passed during the 18th and 19th centuries among the Habsburgs' Austrian, Croatian, and Hungarian possessions until its attachment to the latter kingdom for the third and last time in 1870. Although Croatia had a constitutional autonomy within Hungary, the City of Fiume was independent, governed directly from Budapest by an appointed governor, as Hungary's only international port. There was competition between Austria's Port of Trieste and Hungary's Port of Fiume.

Major port development, the general expansion of international trade and the city's connection (1873) to the Hungarian and Austrian railway networks contributed to rapid population growth from 21,000 in 1880 to 50,000 in 1910. A lot of major building of the city took place at that time, including the Governor's Palace by the Hungarian architect Alajos Hauszmann. The future mayor of New York City, Fiorello La Guardia, lived in the city at the turn of the 20th century, and reportedly even played football for the local sports club. In 1912 the future Hungarian head of state János Kádár was born in then Fiume.

The Italo-Yugoslav dispute and the Free State

Habsburg-ruled Austria-Hungary's defeat and disintegration in the closing weeks of World War I led to the establishment of rival Italian and Croatian administrations in the city as both Italy and the founders of the new Kingdom of the Serbs, Croats and Slovenes (later Yugoslavia) claimed sovereignty based on their "irredentist" ("unredeemed") ethnic populations.

After a brief Italian occupation, an international force of French, British and United States troops occupied the city (November 1918) while its future was discussed at the Paris Peace Conference during the course of 1919.

Italy based her claim on the fact that Italians were the largest single nationality within the city. Croats made up most of the remainder, and were also a majority in the surrounding area, including the neighbouring town of Sušak. Negotiations were rudely interrupted by the city's seizure on September 12, 1919 by a force of Italian nationalist irregulars led by the writer Gabriele d'Annunzio, who eventually established a state, the Italian Regency of Carnaro. This happened just two days after the Treaty of Saint-Germain was signed that declared the Austro-Hungarian Monarchy dissolved.

The resumption of Italy's premiership by the Liberal Giovanni Giolitti in June 1920 signaled a hardening of official attitudes to d'Annunzio's coup. On November 12, Italy and Yugoslavia concluded the Treaty of Rapallo, under which Fiume/Rijeka was to be an independent state, the Free State of Fiume/Rijeka, under a regime acceptable to both.

D'Annunzio's response was characteristically flamboyant and of doubtful judgment: his declaration of war against Italy invited the bombardment by Italian royal forces which led to his surrender of the city at the end of the year. Italian troops took over in January 1921. The election of an autonomist-led constituent assembly for the territory did not put an end to strife: a brief Italian nationalist seizure of power was ended by the intervention of an Italian royal commissioner, and a short-lived local Fascist takeover in March 1922 ended in a third Italian military occupation. Seven months later Italy herself fell under Fascist rule.

A period of diplomatic acrimony closed with the Treaty of Rome (January 27, 1924), which assigned Fiume to Italy and Sušak to Yugoslavia, with joint port administration. Formal Italian annexation (March 16, 1924) inaugurated twenty years of Fascist rule and a policy of forced Italianization of the Croatian population, followed by twenty months of German military occupation.

The aftermath of World War II saw the city's fate again resolved by a combination of force and diplomacy. This time, Yugoslav troops advanced (early May 1945) as far west as Trieste in their campaign against the German occupiers of both countries: Fiume became Croatian (and until June 1991, Yugoslav) city of Rijeka, a situation formalized by the Paris peace treaty between Italy and the wartime Allies on February 10, 1947. Once the change in sovereignty was formalized, 58,000 of the 66,000 Italian speakers fled the city in advance of Tito's communist regime and went into exile (Esuli). The discrimination most of them experienced and the persecution many of them suffered at the hands of the new Yugoslav authorities in the dying days of World War Two and the first weeks of peace were a painful memory for them. Summary executions of hundreds of suspected 'Fascists', Italian public servants, military and just ordinary citizens pushed Fiume's Italians to abandon their ancestral home.

HNK Ivana pl. ZajcaTvornica "Torpedo" (the Torpedo factory) The first European prototypes of a self-propelled torpedo were created by Giovanni Luppis, a retired naval engineer from Fiume/Rijeka. The remains of this factory still exist, including a well-preserved launch ramp used for testing self propelled torpedoes on which in 1866 the first torpedo was tested.

Svetište Majke Božje Trsatske (Sanctuary of Madonna Trsatian) (Zvijezda mora, Kraljica Jadrana, zaštitnica putnika - Star of the sea, Queen of Adriatic, protector of the travelers.) Built 135 meters above the sea on the hill Trsat 7 centuries ago, it represents keeper of the travelers and especially seamen who bring offerings to madonna so she will guard them or to help them in troubles or illness. Among other gifts especially rises the gothic sculpture of (Gospa Slunjska) Madonna of Slunj and paintings from baroque painter C. Tasce.

Stara vrata, Rimski luk (Old gate,Roman arch) At first it was thought that it was a Roman Triumph Arch built by the roman emperor Claudius Gothicus but later it was discovered to be just a portal of gates to Pretorij, army command from late antiquity.