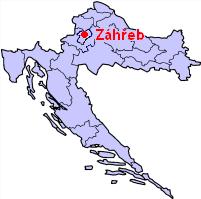 Zagreb is the capital and the largest city of Croatia. Zagreb is the cultural, scientific, economic and governmental center of the Republic of Croatia. The city's population in 2001 was 779,145[1] (1.1 million in the metropolitan area). It is situated between the southern slopes of the Medvednica mountain and both northern and southern bank of the Sava river at an elevation of approximately 122 m above sea level.

Its favourable geographic position in the southwestern part of the Pannonian Basin, which extends to the Alpine, Dinaric, Adriatic and Pannonic regions, provides an excellent connection for traffic between Central Europe and the Adriatic Sea.

The transport connections, concentration of industry, scientific and research institutions and industrial tradition underlie its leading economic position in Croatia. Zagreb is the seat of the central government, administrative bodies and almost all government ministries.

The history of Zagreb dates as far back as 1094 when the Hungarian King Ladislaus founded a diocese. Alongside the bishop's see the canonical settlement Kaptol developed north of the Cathedral, as did the fortified settlement Gradec on the neighbouring hill. Today the latter is Zagreb's Upper Town (Gornji Grad) and is one of the best preserved urban nuclei in Croatia. Both settlements came under Tatar attack in 1242. As a sign of gratitude for offering him a safe haven from the Tatar the Croatian and Hungarian King Bela IV bestowed Gradec with a Golden Bull, which offered its citizens exemption from county rule and autonomy, as well as its own judicial system. According to legend, Bela left Gradec a cannon, under the condition that it be fired every day so that it did not rust. Since 1 January 1877 the cannon is fired from the Lotrščak Tower on Grič to mark midday.

The main square of the Gornji Grad is dominated by the Gothic church of St. Mark's. It was built at the end of the 14th and the beginning of the 15th century and a late Baroque bell tower was added later.

Fighting ensued between the Zagreb diocese and the free sovereign town of Gradec for land and mills. Sometimes also for political reasons. The term Zagreb was used for these two separate boroughs in the 16th century. Zagreb was then seen as the political centre and the capital of Croatia and Slavonia. In 1850 the town was united under its first mayor - Josip Kaufman.

The area between the railway and the Sava river witnessed a new construction boom after World War II. After the mid-1950s, construction of new residential areas south of the Sava river began, resulting in Novi Zagreb (New Zagreb). The city also expanded westward and eastward, incorporating Dubrava, Podsused, Jarun, Blato, and other settlements.

The cargo railway hub and the international airport Pleso were built south of the Sava river. The largest industrial zone (Žitnjak) in the southeast represents an extension of the industrial zones on the eastern outskirts of the city, between the river Sava and Prigorje region.

In 1987 Zagreb hosted the Universiade.

In 1991, it became the capital of the country following secession from Second Yugoslavia. During the 1991-1995 Croatian War of Independence, it was a scene of some sporadic fighting surrounding its JNA army barracks, but escaped major damage. In May 1995, it was targeted by Serb rocket artillery in the Zagreb rocket attack that killed seven civilians.

Urbanized lines of settlements connect Zagreb with the centres in its surroundings: Sesvete, Zaprešić, Samobor, Dugo Selo and Velika Gorica. Sesvete is the closest one to become a part of the conurbation and is in fact already included in the City of Zagreb.